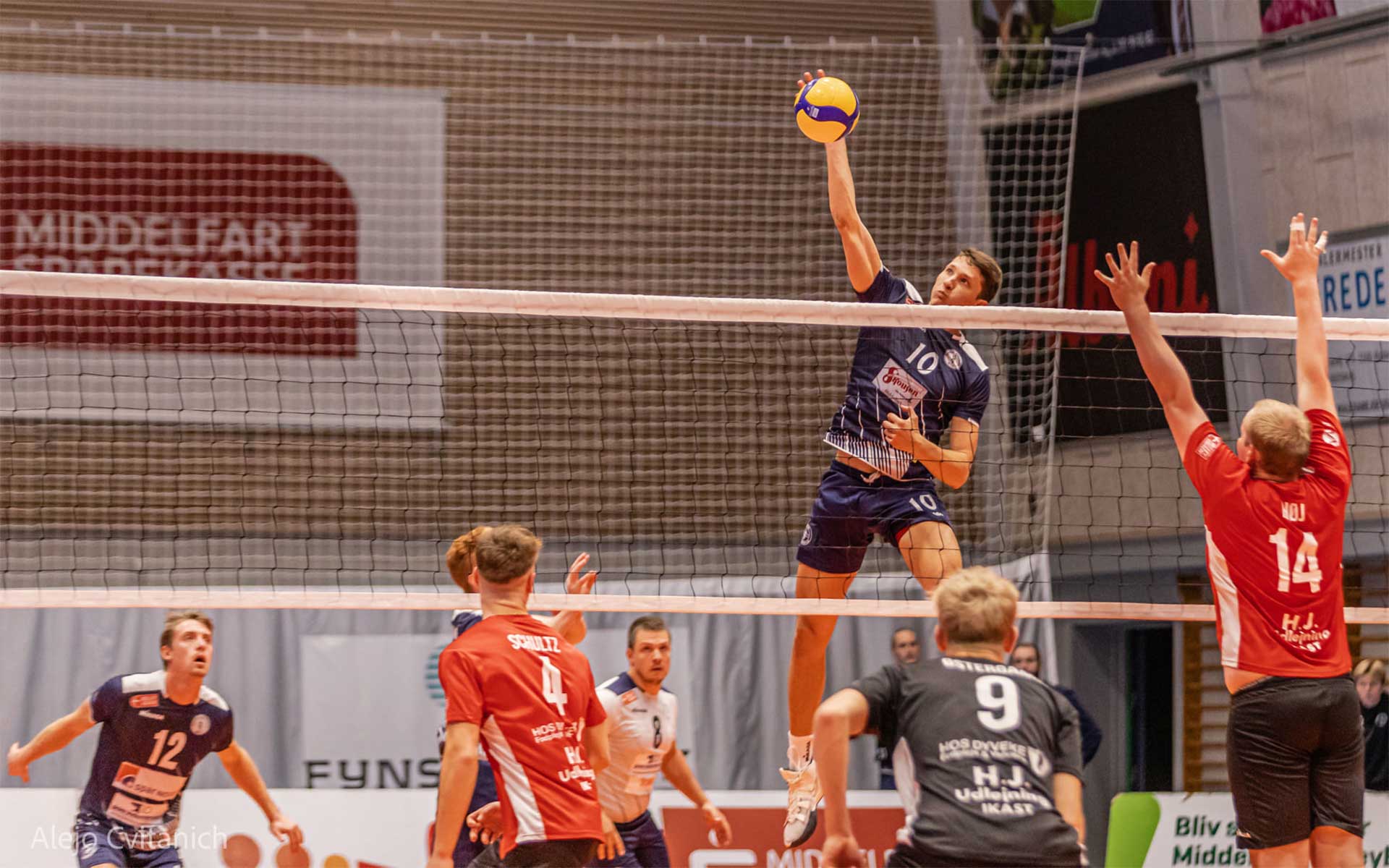 Riding the wave of success after winning a Gold Medal at the NORCECA Championships with Puerto Rico, Jonathan Rodriguez has started the season undefeated (3-0) in the Danish VolleyLigaen. His team, Middelfart VolleyballKlub, has been on a roll after a dominant season last year, winning the Danish Cup 3-0 against five-year reigning champ Gentofte Volleyball. It was also the first time in 40 years that the club has won the Cup, and manager Jacob Pederson is determined to take his team as far as they can this year!

Winning the Cup has also meant that the team is now eligible to compete this year for the CEV Challenge Cup. If they do well, it could mean future participation in the CEV Cup/Champions League. Jonathan is playing with a strong cast of returners, including last year’s league MVP and Best Outside, Irvan Brar. Then there is also the Danish National team Outside Nikolaj Hjorth, who took 1st place in the European Silver League just this summer. Undoubtedly, Jonathan is in good hands with Middelfart as he begins his first steps to a prosperous career abroad in Europe.

“Ever since I started playing volleyball, I’ve always wanted to play abroad, especially in Europe. When I was young, I idolized players from the LVSM (PR Pro league), who many at the time had played in Europe. So since then, I’ve wanted to do the same and create my own path,” mentioned  Jonathan Rodriguez.

The challenge cup will be his first international competition for Jonathan, aside from world leagues with the Puerto Rican National Team. The same goes for the other players on the roster, as they join the few volleyball elites who compete in the prestigious league.

“Playing in the VolleyLigaen and the CEV Challenge Cup will expose me to new styles of volleyball that I have never seen before, enhancing my knowledge and skill of the sport. Hopefully, this is a good season for me in both Denmark and the CEV, so I can come back or play in other European leagues as well!” Rodriguez went on to say.

Their first match of the CEV Challenge Cup will take place November 10th against the Greek powerhouse P.A.O.K. Thessaloniki who have decades of experience competing in the CEV and Champions league. Middelfart VK will need to be at their best from the very beginning of this tournament if they hope to make it far this year. They will have a slight advantage for the first matchup with home court, where the local Danish fans have always shown great support for their hometown heroes!

Check out the team’s Facebook page (MiddelfartVK) to find links to watch live streams of their games in both the VolleyLigaen and CEV Challenge Cup. Their next match in the VolleyLigaen will be October 30th against the #2 ASV Elite. If they pull off another 3-0 sweep over ASV, the team will jump from 3rd to 1st in the league rankings. Fans can also give Jonathan (@jona7rodz, @jonavolei15) a follow on Instagram to stay up to date with all of the action as he travels Europe playing the sport we all love.

Best of luck this season to Jonathan and the MVK crew! LA Blaze knows this experience will make Jonathan a tremendous asset for the team in 2022.

“Volley On With the NVA!”