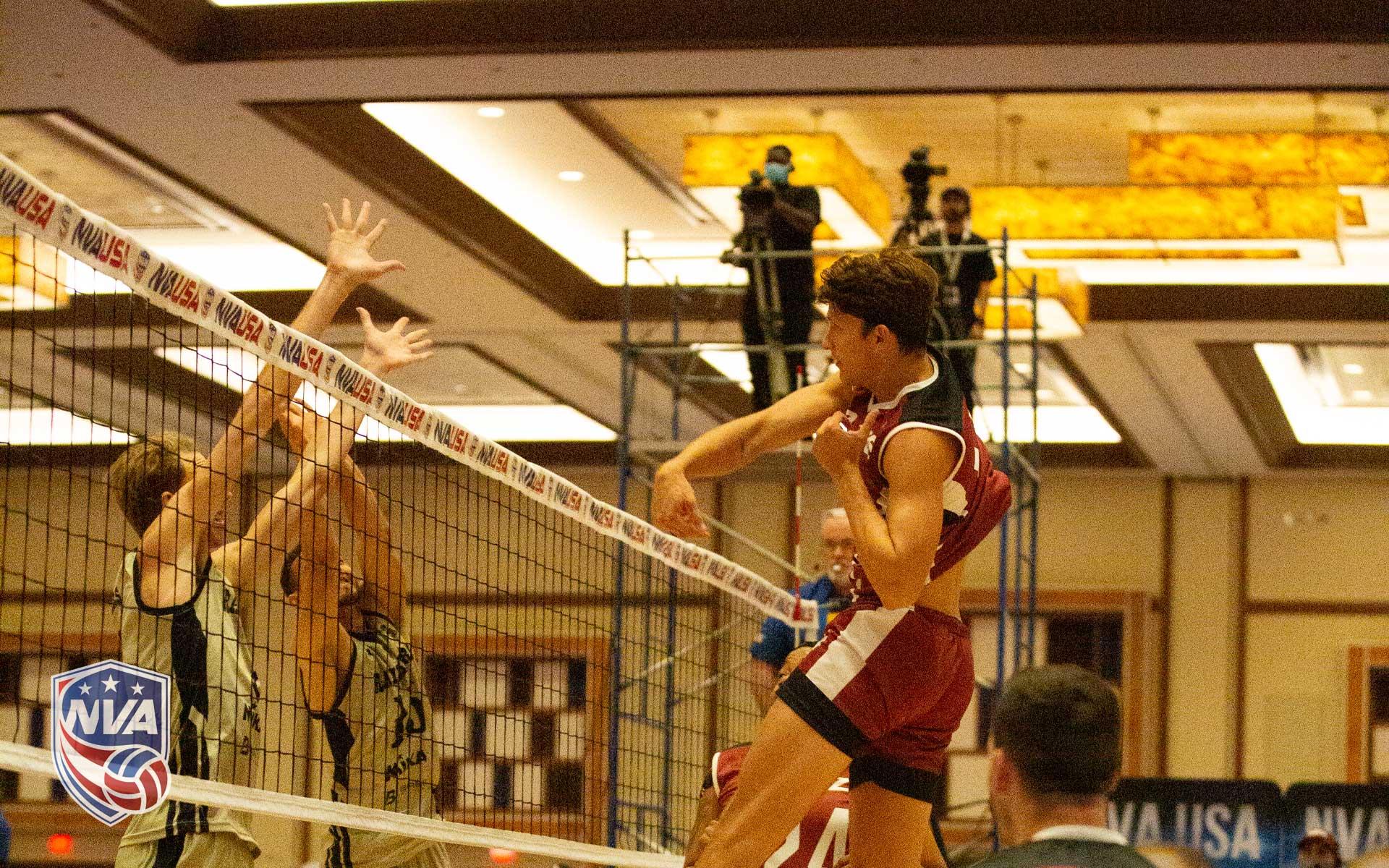 The match started off with both teams going pound for pound with heavy swings from Travis O’Gorman and Matt Seifert and craftier tips from Pedro Nieves. LA Blaze managed to get some early separation with consecutive blocks from Edison Zhou and Pablo Guzman, digs from Ricardo Massanet, and a fast back-row attack from O’Gorman. After a controversial double wasn’t called on LA Blaze, the team went on a seven-point service run giving Blaze a 20-12 lead. Team freedom still managed to fight hard with long rallies and impressive saves from Jordan Robinson. Steven Morales put in the final daggers of the set with a kill and service ace to end the set 25-16.

Set had a similar start with both teams going kill for kill, with Morales leading the charge with three early kills for LA Blaze. Where one team excelled, the other responded with Keith Kegerreis scoring a colossal ace to only have Guzman returning with a massive cross-court shot. However, after tying at 8-8, LA Blaze seemed to break down after a momentum-changing overpass kill by Arslan Besmir. Team Freedom pushed hard on a five-point service run, allowing them to gain a seven-point lead at 18-11. Blaze made a heroic effort to return from their deficit by making it to 25-19.

Travis O’gorman continued to be the kill leader for LA Blaze, scoring three of four Blaze’s first points. At the same time, Christopher Nugent and Besmir gained the first points of set three for Team Freedom. As the set developed, neither team could solidify a lead with errors at every other point, including nets and foot-faults on top of numerous hitting and service errors. Guzman helped to break away with a massive block at 16-16 and collect 4 digs in the set to help give LA Blaze more opportunities to score in the late game. Three service errors by Besmir, Kegerreis, and Seifert put Team Freedom in the grave as LA Blaze took the set 25-22.

Early on, Blaze took a 6-1 lead with kills from O’Gorman and a block and kill from Greg Faulkner while Team Freedom continued to make errors. LA Blaze held onto their five-point lead until O’Gorman made a string of three errors which allowed Team Freedom to get up to two points behind at 16-14 and force Blaze to take a timeout. From the timeout, Team Freedom’s Kegerreis and Seifert both put up blocks which finally tied the set at 18-18. Team Freedom then held a slight lead until Christopher Vaughan tragically sprained his ankle during a block and is subbed from the game. Rallying together for their fallen comrade, Team Freedom fought neck and neck with LA Blaze until a hitting error by Morales gave Freedom the winning point at 26-24.

The fifth set was an exhilarating deathmatch as both teams, now 2-2, desperately fought to get the upper hand on the other. No team could take the lead until after two blocks by Matt Seifert put Team Freedom at 11-9. Joe Norman came in clutch at the end to get two kills at 13-11 and 14-12 and the final point taken by Besmir to end the match 15-13.

Set one begins with an error from Bugs on a double set, but they quickly get that point back after a massive block from Greg Faulkner. The Tyrants side out with a kill from Tim Johnson, and they receive the ball and Gianluca Grasso goes back on a three point service run accompanied by an overpass kill, score is 4-1 Tyrants. The Blaze answer back with a kill from LA8 and Jonathan Rodriguez, but the Tyrants capitalize on their big block from Ryan Maune and a missed serve takes them into a timeout 8-5 Texas in the lead. The LA Blaze come out of the timeout and notch a kill from Rafeal Cruz, but an error from Greg Faulkner and a kill from Gian give the Tyrants a four point lead, 10-6. The BLaze call a timeout but out of the timeout they commit an error and a block from Gianluca Grasso and a kill from Anthony Robinson give the Tyrants a demanding seven point lead. The Blaze answer back with kills from Pablo Guzman and Rafael Cruz, but still are prone to too many errors, score 16-8 Texas. The Tyrants begin to roll on the Blaze as Daniel Johnson gets two kills but Daniel Jacobs gets three kills and a block. Final Score 25-25 Texas Tyrants.

Set two picks up right where set one left off, with the Tyrants just on an absolute roll. Ryan Maune gets three blocks and a kill, and Gianluca Grasso and Anthony Robinson both get kills to help out. The Tyrants lead 8-3 going into the technical timeout. Coming out of the timeout the Blaze starts getting Jonathan Rodriguez the ball as he goes two for two, but a block and a kill by Gianluca Grasso and an ace by Ryan Maune allow them to stay in the lead, score 12-7 Tyrants. The Blaze come out of the timeout with a little momentum with a block by Travis O’Gorman and Jonathan Rodriguez each and an error by Gianluca Grasso gets the score up to 12-10 Tyrants lead. Although the Blaze attempted to get some momentum back Daniel Johnson came in with a kill and two blocks to get the score to 16-12, Tyrants lead. The Tyrants continued with the momentum as Daniel Johnson decided to take over the game with three kills and two blocks. Jonathan Rodriguez and Travis O’Gorman attempted a response but the Tyrants continued to sideout consistently, 22-17 Tyrants. The Blaze had trouble getting their offense together after two errors and were sent off the court with an ace from Gianluca Grasso, final score 25-18 Tyrants.

The LA Blaze came out of the side switch a little more fired up than the previous two sets, forcing the Tyrants to make a lot of hitting errors, but a block by Austin Lovett and multiple kills from Tim Johnson allowed the Tyrants to go into the technical timeout up 8-7. Once again the Tyrants came out of the timeout with some energy, as they started to feed Tim Johnson and Gianluca Grasso the ball as they both started racking up kills. Jonathan Rodriguez tried to slow them down with some kills as well but was not as effective as the Tyrants were able to push to an 18-14 lead. LA started to come back after multiple errors by the Tyrants and Steven Morales and Travis O’Gorman started to string together some kills, tying up the game at 20-20. Both teams then started to trade blows back and forth until an error by the Tyrants and a bic kill by Travis O’Gorman gave the LA Blaze the win, 26-28.

After a tough loss to the Stunners the day before, the Ramblers started this one off guns blazing with the help of their star player Brandon Rattray. The league’s points leader picked up two kills and two aces right off the bat to give his team a 5-1 lead. The two teams then went back and forth by exchanging missed serves and long rallies. The Ramblers were the beneficiary of these rallies. They came up with some big digs and blocks to extend their lead to 16-11 at the second technical timeout. The ladder third of the set was still all Ramblers as the Blaze struggled with their reception and lacked any substantial energy to get them going. Ultimately, it was the Vegas team winning 25-15 in a lackluster first set.

Hoping to provide a fresh spark through a lineup change, LA Blaze put in middle blocker Greg Faulkner, setter Edison Zhou, and outside hitter Pablo Guzman. Unfortunately, the three new changes shot themselves in the foot, missing three serves in a row to start the set. Luckily, Zhou ran a fast and diverse offense, allowing them to side out and keep them in it early. A Ryan Mather hitting error followed by back-to-back aces by Travis O’Gorman brought the Blaze to a 9-5 lead. After Rattray started off the frame a little quiet, he decided to pick things up again with a big kill off the block and two aces of his own to bring his team the lead once again at 16-15. The two teams were neck and neck in this exciting finish to the second set until Mather and Aguillard combined for a monster block to give the Ramblers a 23-21 lead. At 24-23, Greg Faulkner had three unbelievable digs to keep the Blaze alive. However, he could not stop the final ball from hitting the floor after bouncing off the ceiling, losing them the set.

The third and final set started a bit uneventfully as both teams traded hitting and serving errors. The Rambler’s block-defense then picked up as they converted on transition opportunities with two high ball assists by Manoogian to Rattray. Then Aguillard picked up his fifth block of the match giving his team a 12-9 lead and forcing the Blaze to call a timeout. The LA team was trying to catch up for the remainder of the set; however, a combination of poor passing and great middle transition attacking by the Ramblers lead them to their defeat. Brandon Rattray was the match player with 24 points, and Sean Dennis was also fantastic with 11 points. Travis O’Gorman tallied 10 points of his own in a losing effort for the Blaze. The Las Vegas Ramblers are now 5-1 on the season and are looking to continue their run at the next event, while the LA Blaze is looking to improve their 2-4 record.